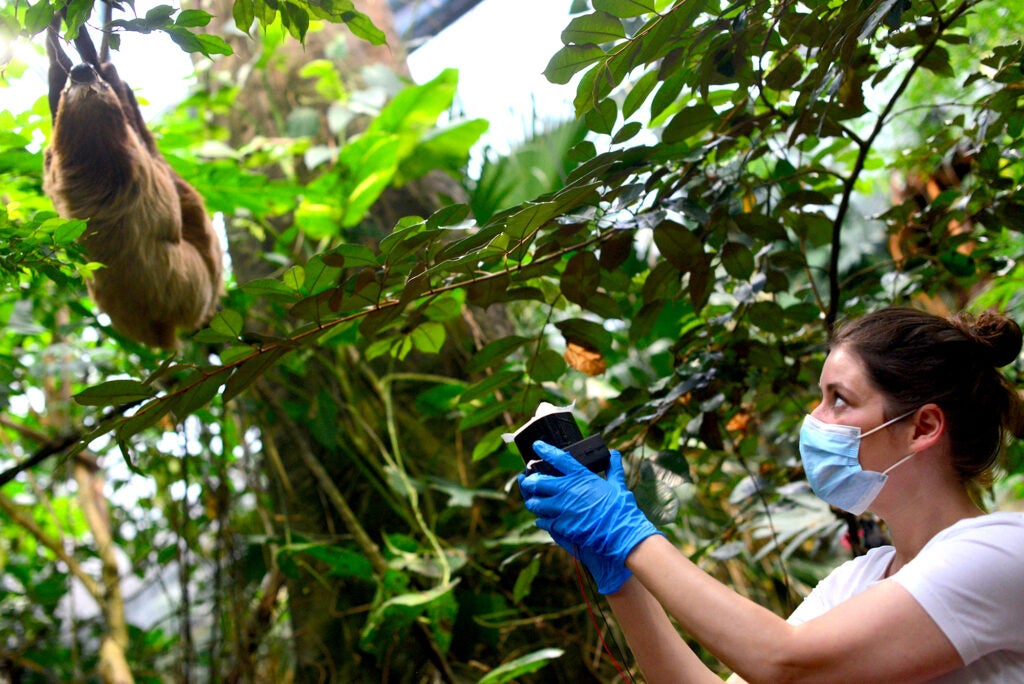 When you leave a zoo, you physically carry traces of the animals home with you.

A pair of new studies, published together in the journal Current Biology, found that by simply filtering air around zoos, researchers could recover genetic material from surrounding animals. They didn’t just detect the captive animals, though—the teams captured environmental DNA‚ or eDNA, from chicken and fish fed to those animals, and from wild and domestic creatures living nearby.

The technique has the potential to revolutionize environmental monitoring. Traditionally, biologists resort to direct observation: standing around looking for animals, or waiting for them to step in front of wildlife cameras. Particularly in thick tropical forest, “it’s actually very difficult to see vertebrates,” says Christina Lynggaard, a postdoctoral researcher who studies evolution and genomics at the University of Copenhagen, and the lead author on the second paper. “You hear them, and you see insects all over.” But getting a picture of the full complement of birds, monkeys, and reptiles can be impossible, she adds. That’s a problem for understanding pressing conservation questions, like the disappearance of rare species from fragmented forests.

“I think that they have demonstrated in a really quick pair of papers here that we need to be thinking much bigger about the potential of airborne eDNA for biodiversity detection,” says Matthew Barnes, an ecologist who studies the movement of eDNA at Texas Tech University, and was not involved in the two studies.

The two teams began the research independently, but by coincidence were asking almost an identical question. They saw each other’s results before publication, and decided to join forces to get the papers published side-by-side. “We think these papers should appear together because they are a perfect scientific replication,” says Elizabeth Clare, an ecologist at York University in Canada, and the lead author on one of the papers. (She conducted the research while at Queen Mary University of London.) “And that’s ultimately what you should do in science.”

As the price of genomic sequencing has fallen, eDNA research has exploded in popularity as a tool for understanding ecosystems. Researchers have harvested blood from leeches to find genetic material from animals they’ve bitten. A graduate student in Barnes’ lab at Texas Tech University has found that plants release plumes of DNA into the air around them. But no one had taken the step toward figuring out whether microscopic traces of animal could be recovered from the air directly.

“None of us knew if it would work, especially outside,” says Clare.

The scientists turned to zoos—one in the UK, one in Denmark—because, as Clare puts it, “the zoo is this remarkable collection of non-native species.” This allowed the researchers to prove that they found DNA from the location they were studying. If they were to monitor the air on a farm, for instance, it would be impossible to know if they were detecting DNA from cows nearby, or miles away. “The problem I faced with the cows cannot happen with a tiger,” Clare says. “There is no other source of tiger DNA except the one in front of me. We know precisely what we should detect.”

Both teams set up air filters around animal enclosures, from outdoor barns to indoor tropical rainforest exhibits. Once the filters had sucked up enough zoo air, they soaked them, making a broth of all the debris that had been in the air. Then, they hunted for sequences of vertebrate DNA.

“You sort of play a game, a bit like Go Fish,” says Clare. “I have my unknown, and I compare it to my database of known things, and I look for a really good match.”

The teams had lists of zoo animals to compare against, but they were also able to pick up and identify DNA from unexpected sources. Clare’s group found evidence that zookeepers were tracking DNA from one enclosure to another. In the rainforest building, Lynggaard’s crew spotted DNA from the guppies in the ponds. “It’s one thing if you have a rhino that is scratching, or a bird that is flying around,” says Lynggaard. “But the guppies don’t leave the water. How often do they have contact with the air?”

The researchers also found DNA from chicken, fish, and other meat fed to the zoo animals. But they also began to find samples that didn’t match anything at the zoo. Lynggaard’s team found DNA from songbirds and crows, while Clare’s found duck, squirrel, and the endangered Eurasian hedgehog.

It’s not clear exactly what exactly is floating around in the air, carrying the DNA. The teams suggest it’s likely a combination of dead skin, fur, saliva, and feces (“my life has changed,” Lynggaard says of this realization). Figuring that out will help researchers understand how airborne DNA moves through the environment.

But while eDNA can provide ample clues, it can’t tell a complete story. The genetic material degrades over time, so researchers will need to learn how to figure out when the “footprint” was left. Initial applications of this technique are likely to be most useful in finding either endangered or non-native species.

Pinpointing locations of endangered and non-native species can assist in conservation and early warning efforts, she adds. But the findings also suggest that living things are constantly leaving traces of themselves on the surrounding world.

“Anyone that suffers pet allergies knows that animal dander in your home can stir up into the air,” says Barnes. “But both these studies are demonstrating that all sorts of plants, all sorts of animals, mammals, birds, reptiles, and amphibians are potentially releasing eDNA that’s collectible.”

As the technology develops, it’s possible that it will let researchers track the movements of migratory animals, or even understand how common they are. “I do think differently about the environment, having worked with eDNA like this,” says Clare. “I know that … if I swim in a lake, I’m swimming through eDNA. There’s these new sources of information that we’re only beginning to learn how to use. I go back to thinking about all my fieldwork in tropical places, and all the animals that leave traces of themselves behind.”