All weapon types in The Anacrusis 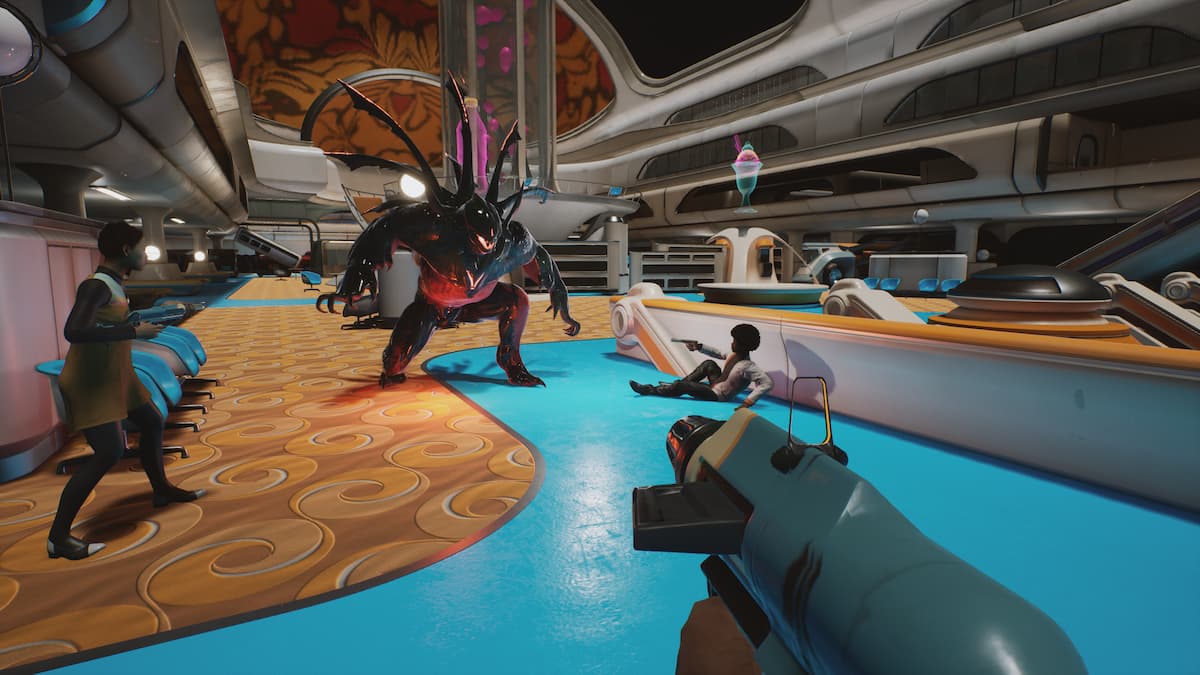 The Anacrusis, a four-player co-op shooter, pits you and your team against a horde of aliens that have infested and taken over the crew of the space station. Naturally, you’ll need to arm yourself with whatever you can find — and there are a lot of choices. Here are all of the weapon types in The Anacrusis.

The pistol is your standard starting sidearm. It features a ammo capacity of 12 shots, and infinite surplus ammo — but your firepower, rate of fire, and spread are not great. This is a “I just ran out of ammo for my good gun” type of weapon, and unfortunately it is also the only weapon you can use when you are downed.

The SMB is similar to the SMG in other games. This gun features a high rate of fire and ammo capacity of 500, but a middling spread, range and firepower makes it a little on the weaker side. It is great for mowing down various Grunts in between encounters, and extremely useful for clearing out the minions that the Spawner produces. This weapon can be selected in all Safe Rooms.

The Blaster is this games variation on the shotgun from other shooters. The Blaster boasts high firepower, but also high spread, low range, and low rate of fire. The ammo capacity sits at 96, so you may need to find an ammo refill station from time to time, especially during longer encounters. Having a Blaster on hand is useful for clearing out Grunts, but especially handy for dispatching Brutes. This weapon can be selected in all Safe Rooms.

For all of you assault rifle fans out there, the Plasma Rifle has that niche covered. This weapon is your Swiss Army Knife — middling firepower, rate of fire, and hip-fire spread. When aiming down sights, however, the Rifles spread reduces dramatically, allowing you to pick targets off from a distance. This is very useful for getting rid of Grabbers and Goopers, and with an ammo capacity of 240, you’ll have plenty of rounds to fire. This weapon can be selected in all Safe Rooms.

A special weapon that can only be found as loot outside of Safe Rooms, the Arc Rifle shocks targets within a wide box in front of you. It’s powerful, and extremely useful for crowd-control, but has an ammo limit of 45, and it cannot be replenished by Ammo Stations.

Another special weapon that can only be found as loot outside of Safe Rooms, the Laser Rifle fires a concentrated, continuous beam of heat wherever you are pointing it at. This is handy for focusing damage on a single entity, but can be used to clear out an entire room if necessary. This weapon has an ammo limit of 45, and it cannot be replenished by Ammo Stations.

A special weapon that can only be found as loot outside of Safe Rooms, the Auto Turret is a “fire-and-forget” type of weapon. Set it up before starting an encounter, and it will automatically track onto and fire at enemies within a 180 degree radius in front of it. It cannot be picked up or turned around once placed, so make sure you have it how you want before setting it down. This weapon has two charges, allowing for two turrets to be placed — however, you can spawn additional Auto Turrets if you can find more.