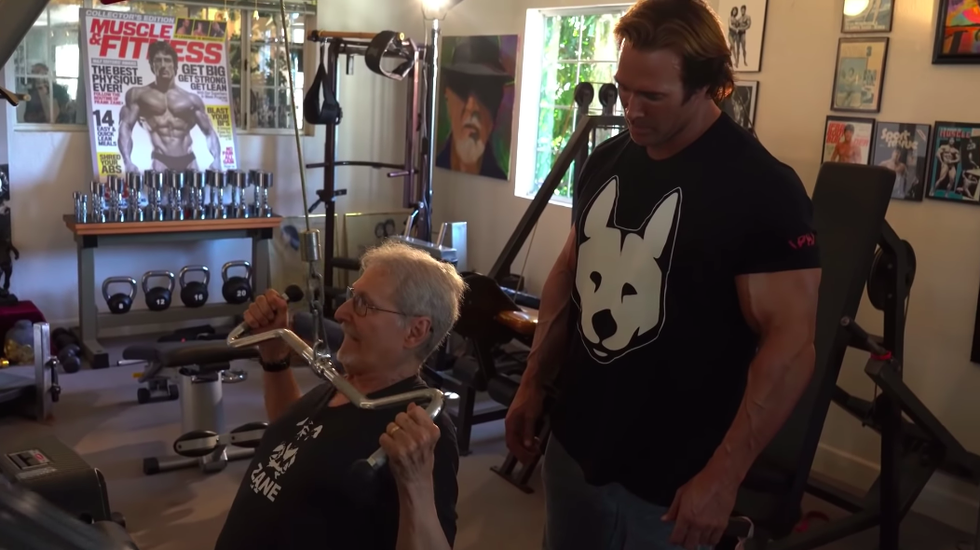 In a new video on his YouTube channel, former Mr. Universe Mike O’Hearn spends the day working out with bodybuilding icon, Frank Zane. The three-time Mr. Olympia champion shows O’Hearn around his fully equipped home gym, which he states includes every single piece of machinery required to achieve a prize-winning physique, and revealed his personal favorite body-sculpting exercise: the neutral grip lat pulldown.

“It’s equivalent to doing chinups with a wide grip, which I don’t favor too much,” says Zane, explaining that a neutral grip helps to reduce strain in his elbows, and that he tends to avoid pullups as with pulldowns he is able to adjust the weight setting. He also demonstrates some of the rehab exercises he has incorporated into his fitness routine as a way of speeding up his recovery from shoulder surgery.

Zane’s workouts have evolved over time, and at age 79, injury prevention is a more prevalent concern. “As I’ve aged, I’ve prioritized walking,” he told Men’s Health. Walking on the treadmill was always part of my competition preparation, but it’s essential as you get older. So is understanding when not to work out. That’s a significant part of managing age. A lot of my early success came through barbell and especially dumbbell training, but as I’ve aged, I’ve replaced many of those exercises with exercises on machines that can isolate particular muscles.”

In the video, O’Hearn can be seen admiring Zane’s three Mr. Olympia trophies, prompting Zane to tell the story of how an injury led to him losing weight in 1980, which ultimately resulted in him not winning the title a fourth consecutive time. “The thing I learned in bodybuilding is when you’re competing, you’ve got to be not only better than everybody else, but you have to be the best you’ve ever been,” he says. “You have to be better than you were when people last saw you. You’re compared against yourself.”