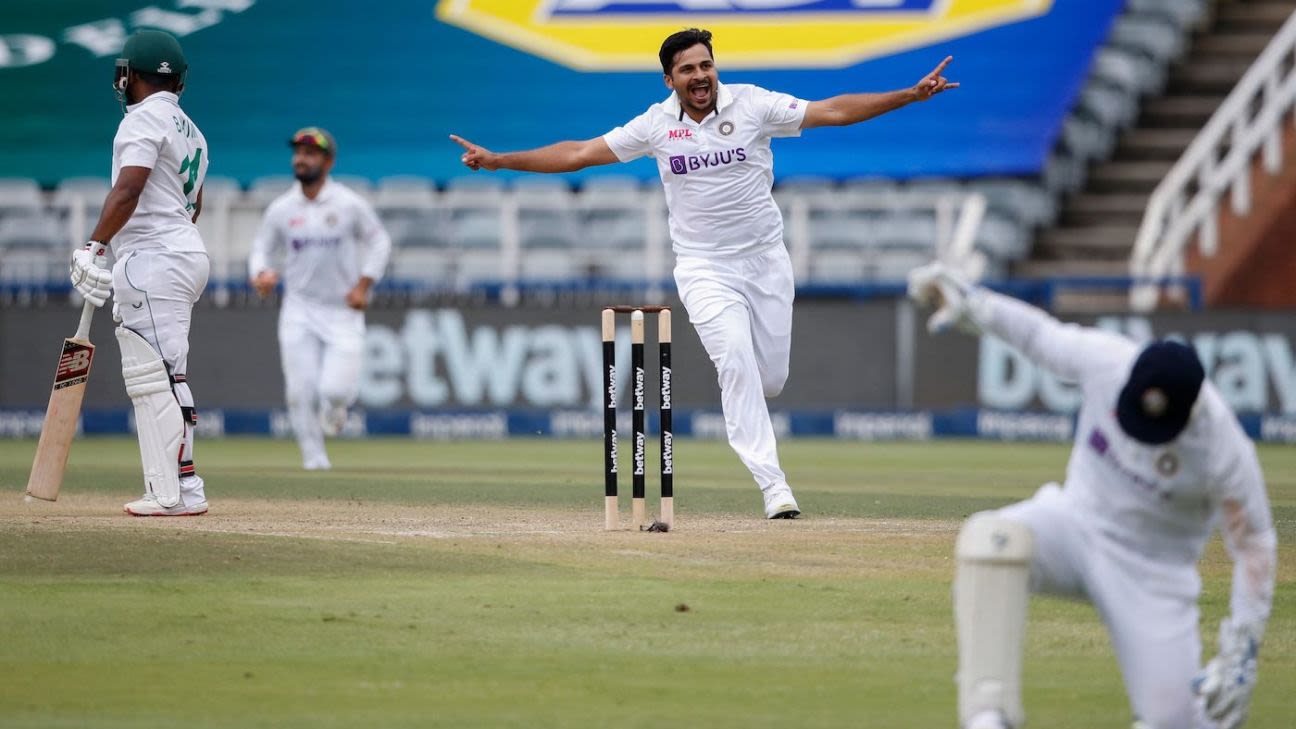 Shardul Thakur‘s seven-wicket haul couldn’t stop South Africa from taking a 27-run first-innings lead but India started their second innings positively and were 85 for 2 – ahead by 58 – at stumps on day two of the second Test in Johannesburg.

With Mohammed Siraj not looking 100% fit, Thakur stepped up with the ball and finished with 7 for 61, the best bowling figures for India against South Africa. However, a 38-run stand for the eighth wicket between Marco Jansen and Keshav Maharaj took South Africa past India’s total.

Both Jansen and Maharaj took the attacking route, hitting three boundaries each in their respective 21s. Jasprit Bumrah, for a change, failed to nail his yorkers and even ended up bowling a beamer to Jansen but eventually pegged Maharaj’s off stump back to end the partnership.

Two balls later, Bumrah hit Duanne Olivier on his left arm as the batter took his eyes off against a raring delivery. Jansen then tried to keep the strike to himself and even struck two fours in Bumrah’s next over, but Thakur dismissed him and Lungi Ngidi in the space of four balls to wrap the innings up.

In response, India lost KL Rahul early, with the opener edging Jansen to second slip where Aiden Markram took a low catch. The on-field umpires referred it upstairs with the soft signal out; the third umpire didn’t find any conclusive evidence to overrule that decision.

Mayank Agarwal was looking fluent, having hit five fours in his 23, but an error in judgement resulted in his wicket. He didn’t offer a shot to an Olivier delivery that nipped back off the surface to trap him lbw.

Cheteshwar Pujara and Ajinkya Rahane, though, ensured India didn’t lose another wicket. Pujara finished the day on 35 off 42 balls with the help of seven fours, two of which came in the final over of the day, while Rahane was batting on 11.

Earlier in the day, Keegan Petersen and Dean Elgar kept India at bay despite a probing first hour of bowling. Bumrah and Mohammed Shami tested the duo – Bumrah with a bit of wobble in the air and Shami with the movement off the seam – but neither was successful in providing a breakthrough.

Bumrah got one to come back in to Petersen after a string of awayswingers. The batter shouldered arms and, luckily for him, the ball went over the stumps.

A few overs later, Elgar edged one off Bumrah and Pant took it low, which the on-field umpires referred upstairs with the soft signal as out. The third umpire concluded that it was a bump ball. In the next over, Shami cut Petersen in half but on this occasion, too, the ball sailed over the wicket.

Rahul then turned to Siraj. The seamer had left the field after hurting his hamstring in the penultimate over of the first day but on Tuesday, he was on the field right from the start. He started with a shorter run-up and was down in pace as well. Petersen took advantage of that, hitting two boundaries in his first over of the day.

Elgar, meanwhile, was stuck on his overnight score of 11. It took him 32 balls to score his first runs of the morning – at one point, he had faced 47 dots in a row. He broke that sequence with a flicked boundary off R Ashwin.

It was Thakur who brought India back in the game, by picking up three quick wickets. Elgar and Petersen had added 74 in 35 overs when he had Elgar caught behind for 28. Petersen reached his maiden half-century with a boundary off Shami and celebrated it with two more fours in the over, but a rare loose shot outside off against Thakur cost him his wicket.

And then, in the last over before lunch, Thakur found Rassie van der Dussen’s inside edge, which hit his thigh and lobbed behind the stumps. The batter walked back, but replays showed that the ball had perhaps bounced just in front of the diving Rishabh Pant. That meant South Africa slipped from 88 for 1 to 102 for 4.

Temba Bavuma and Kyle Verreynne revived the innings after lunch. They added 60 for the fifth wicket in what was South Africa’s third 50-plus stand of the series. But just like the last two times, it was Thakur who broke it, trapping Verreynne lbw with the one that came back in sharply.

In his next over, Thakur had Bavuma caught down the leg side for 51 to complete his maiden five-for in Test cricket. Bavuma, who reached his half-century off just 59 balls, hit six fours and a six during his knock, the most eye-catching being an on-drive against Bumrah.

From the other end, Shami got Kagiso Rabada mistiming a drive to mid-on. At 179 for 7, it looked like India could even take a lead but South Africa’s lower order didn’t let that happen.

Hemant Brar is a sub-editor at ESPNcricinfo