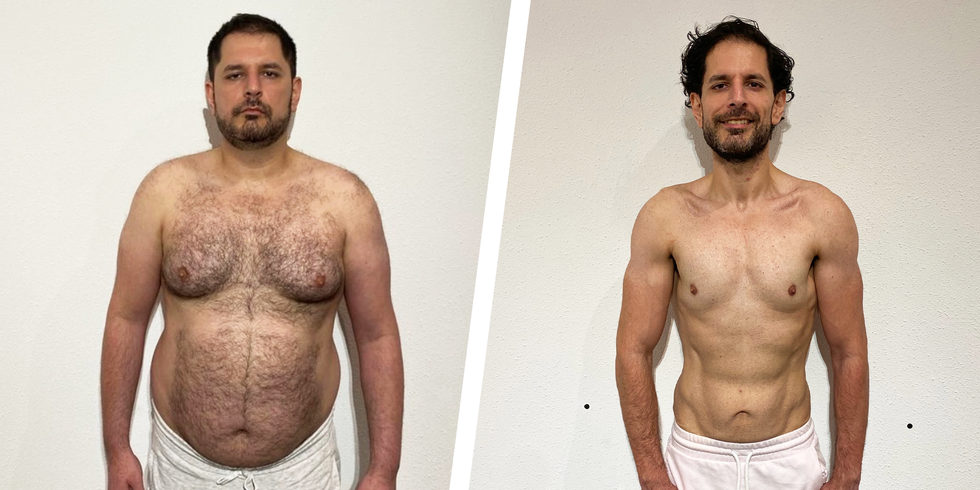 Cem Kocyigit is a 38-year-old living in Amsterdam, the Netherlands, who works in finance. A voracious appetite and near-constant over-eating had left him severely overweight; Covid forced him to face that reality, and commit to turning himself around. In his own words, here’s how he did it.

When Covid hit, I had some dark thoughts. I was 37, overweight in a country that wasn’t my own—and I realized I was vulnerable. A couple months before, I’d hit 265 pounds. I was eating a lot, probably 4,500 to 5,000 calories a day. We’re talking two sandwiches for breakfast, just huge portions all day. I knew that was a problem. With a still-mysterious virus making its way around the globe, I might die alone, with no one to look after me.

I figured it would be easier to get in shape then than at 47, so I started looking around. I found the website for Ultimate Performance here in Amsterdam and read a lot of positive reviews. They looked like they knew what they were doing, and I told myself there’s no shame in asking for help from people who know what they’re doing.

The biggest change was reining in my diet. I had to learn to live with my appetite. I cut back on carbs, eliminating them almost completely. I focused on healthy fats and lots of protein. I also learned how to eat differently: no snacking, just full meals, with water, coffee, or tea in between. I’d drink shakes after a workout.

I did weight training three times a week. It was a challenge at first, because I couldn’t do a lot of the movements, but my trainer pushed me through it. That was intense weight training, adding more difficulty as I progressed. Then I’d also do HIIT workouts twice a week for twenty minutes each. Outside of the gym, I really focused on better sleeping habits. And instead of taking an Uber, now I walk everywhere. I’ll leave 90 minutes ahead of time just so I can walk to wherever I’m going.

In about 16 months I’ve dropped around 170 pounds; my body fat percentage has gone from 38 percent to about 14 percent. I have very muscular arms, legs and glutes now. I have a flat stomach with visible muscles, which is something I never had even when I was in college. A couple of my close friends were so shocked, they needed a couple hours to get used to my new appearance.

It’s been a big boost to my confidence. I‘ve always had good taste in fashion, so I can rock my old good pants and trench coats again, and also look quite good in my new clothes. I wake up more easily in the morning—I’m energetic and ready to go. I had a check-up recently and the general practitioner mistook me for a guy in my twenties. That really made my day.

From here I’d like to maybe bulk up a little, and see if I can finally get that six pack. I’m definitely not finished.

For anyone looking to get started, I want to reiterate that there’s no shame in asking for help. Experts are there to learn from, and the right ones will help you find the path that’s right for you. I’d been exercising off-and-on for four years before I really got to the point of changing things for the better. Sometimes that’s what it takes. Every journey is different.

—As told to Jesse Hicks

Jesse Hicks
Jesse Hicks is a Detroit-based writer and former features editor at The Verge who specializes in longform stories about science, health, and technology.