Living With HIV in Northeast China 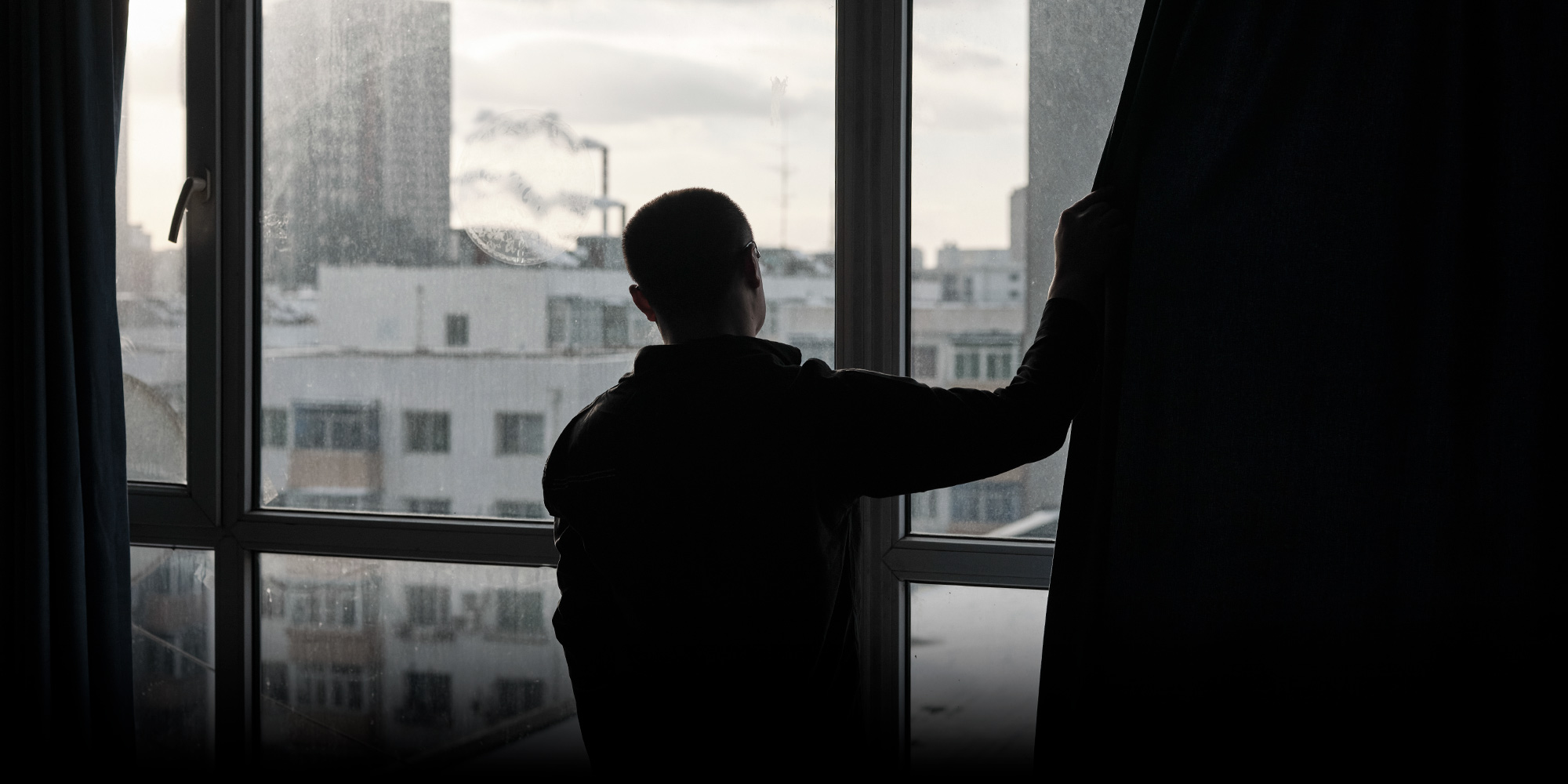 It’s a freezing late November day in Shenyang, and I’m prepared for a difficult conversation as we knock on the door.

I’m following Ma Tiecheng, the founder of a local HIV prevention organization in the capital of China’s northeastern Liaoning province, to visit patients he’s been tracking for many years. It’s part of his daily job.

Two months ago, Zhao, a 38-year-old HIV-positive interior decorator, said goodbye to his partner of 13 years. Zhao’s partner, who was HIV-negative, died of cancer.

Heavy snow covered the city last night. Lying on either side of the dark green asphalt road, it looks like a layer of cream. Ma drives slowly toward the formerly industrial city’s north in his battered silver Zhonghua car. New, tall buildings and apartments flash past our windows, under a bright sun shining in a clear sky.

It was only half a year from Zhao’s partner’s diagnosis to his death. He decided to spend his last hours at home as his health deteriorated rapidly. Shortly after, in Zhao’s care, he died. 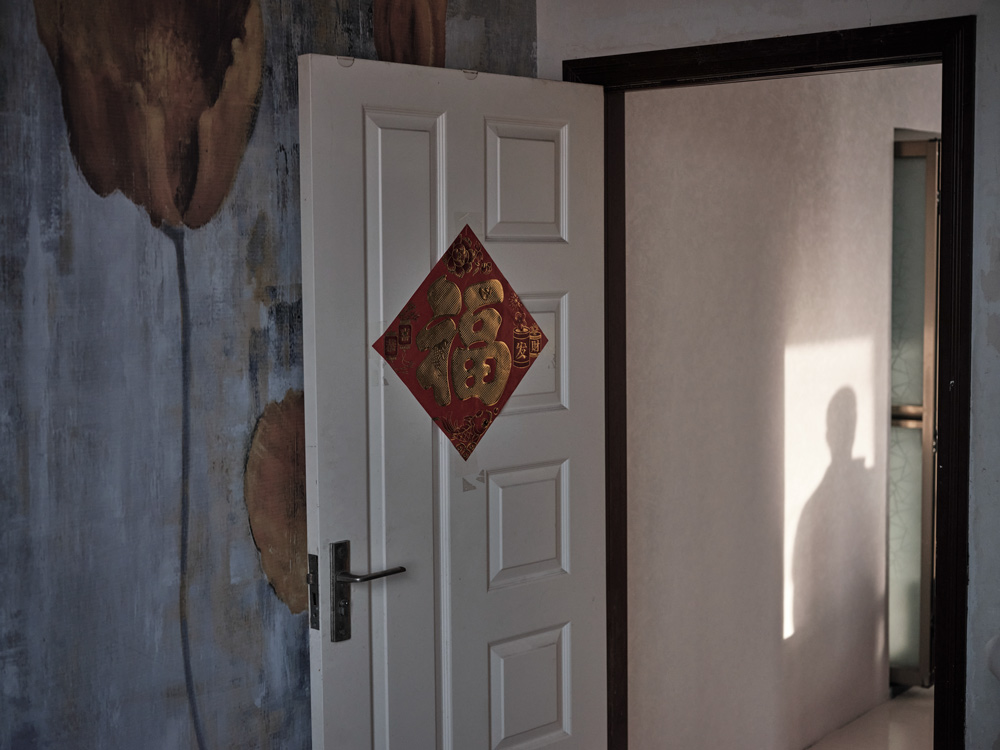 When Zhao opens the door, he looks expressionless, but he is neatly dressed and looks as if he has just had a haircut. The house is tidy, except for a pile of clothes he’s preparing to throw away. Zhao told Ma that it took him just a week to get over his shock at losing his partner.

“Just a week?” Ma was surprised.

“How long do you think I should need?” Zhao replied.

Ma told me later that Zhao always looked tough in every situation he faced. But Ma couldn’t imagine how he had faced the emptiness alone in the first few days after his partner left; what was in Zhao’s mind when he was sitting on the sofa — where they had been together for so many years — staring at the empty house and snow blowing outside the window.

“I threw out his things,” Zhao said, calmly. “In the first few days, I felt uncomfortable without a person. When I looked at his stuff, I always felt that he was still there, so I had to throw his belongings away.” 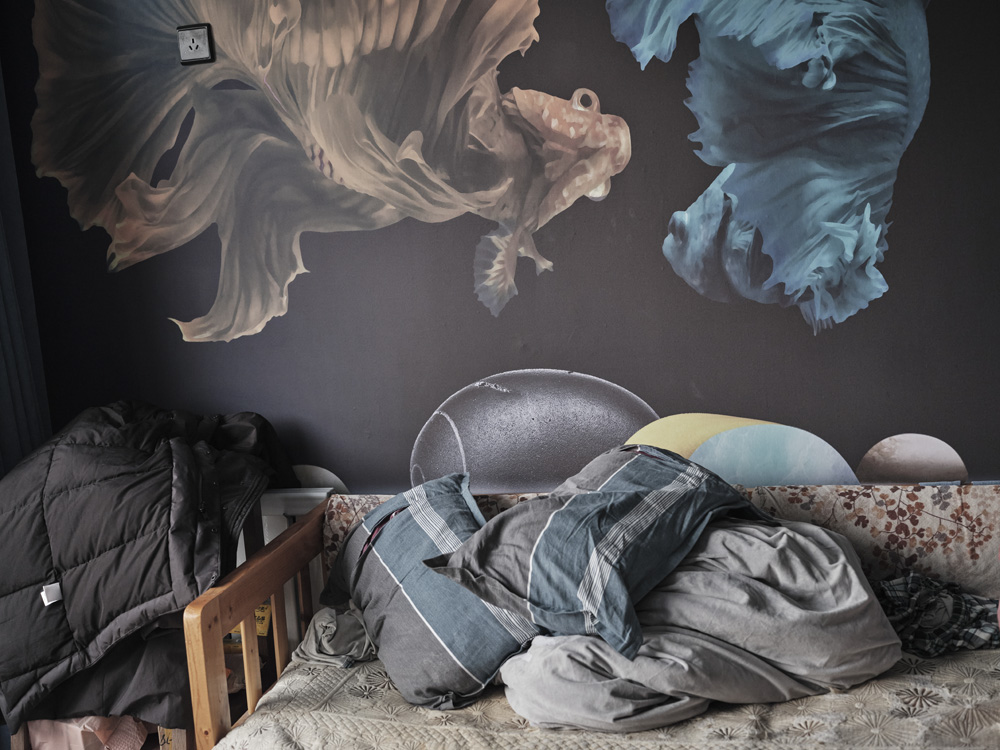 A corner of Zhao Guo’s home in Shenyang, Liaoning province, November 2021. He changed the wallpaper after his partner’s death. Wu Huiyuan/Sixth Tone 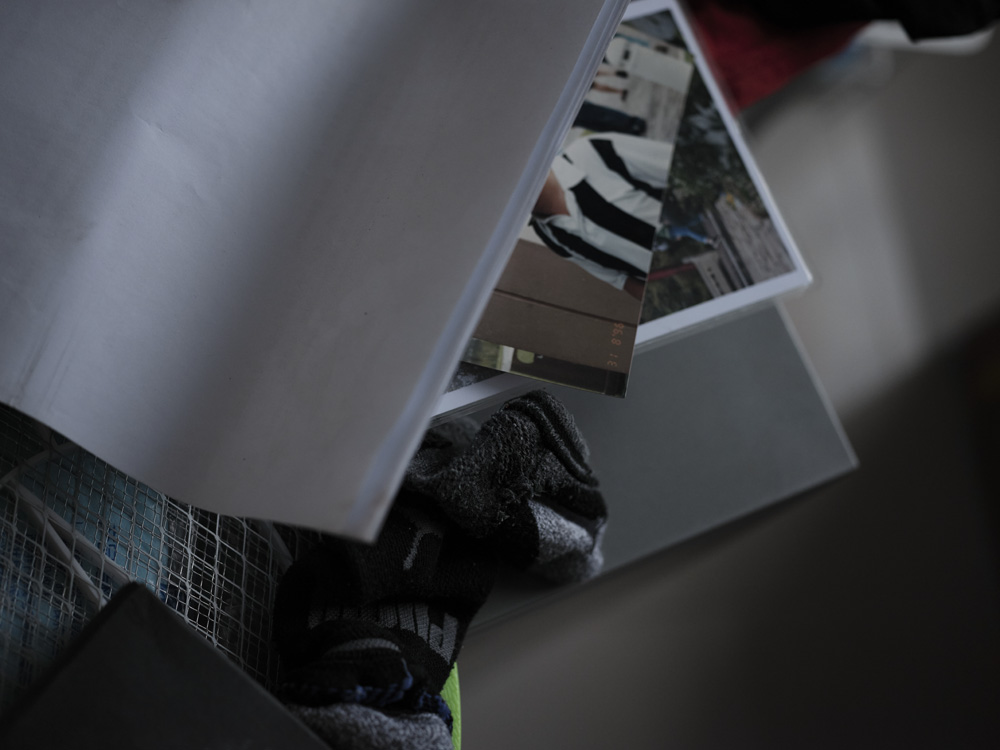 In recent days, Zhao has thrown away nearly everything associated with his partner — beds, cabinets, and clothes — and has re-wallpapered his room, keeping only two portrait photos. He’s got one last pile of clothes ready to go.

“I don’t like taking pictures. We didn’t even have a picture together,” Zhao told Sixth Tone.

Ma said that when Zhao was diagnosed with the infection, he looked as calm as he did now, like he had no emotions. Zhao agreed. He said that he grew up watching many people die in his southwestern Sichuan hometown from suicides, car accidents, or fights between villagers.

It was like someone slipped on a snowy day, and got up and kept walking.

Zhao recalled that after his positive HIV test in 2008, he went to see Ma. After going to a hospital for a formal diagnosis, he told his partner without hesitation. He was ready to accept whatever happened.

Zhao’s partner only blamed Zhao for not protecting himself, Zhao said, and the matter passed, never mentioned again. In the following days and years, everything went on as usual, “Like someone slipped on a snowy day, and then got up and kept on walking,” Zhao said.

After two hours, we’re ready to go. Zhao is going to come with us to visit a 30-year-old architect, Sun Zheng. Sun is ready to decorate a new home, and Zhao is a decorator.

Ma has a few other hopes. He’d like to pull Zhao out a little bit from his “single world.” He also thought Zhao and Sun, since they had similar occupations, might be able to start a relationship over common ground.

On the road, we pass a hospital, and Zhao asks if it offers hospice care. His voice sounds as subdued as if he was asking whether it was going to rain tomorrow. He wants to know, when he’s dying alone, where he should go. Ma hesitates for a second, slows the car, and with a slight turn of the head says, “We will help each other when we’re old. You won’t be alone.” Then he changes the subject.

Zhao says he knows a lot about AIDS and doesn’t think it will affect his lifespan. Every time he participates in Ma’s activities, he hears him say something similar: “We’re just a hair’s breadth away from ending AIDS,” or “AIDS has become a disease similar to diabetes since 1996.” 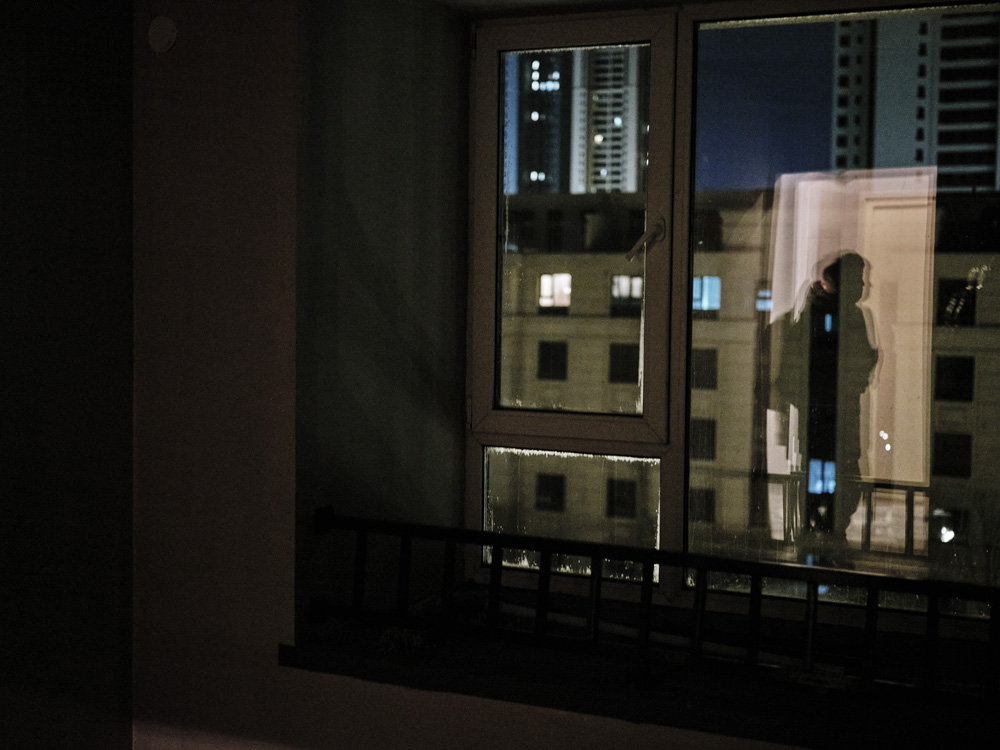 The car stops at a new development about 10 kilometers from the city center. Sun welcomes us on the side of the road, leads us inside, and starts talking with Zhao about how to decorate the apartment. Passing through the palatial entrance gate, we head to Sun’s roughly finished apartment. Ma and Zhao agree that the new community has good residential landscaping and property management.

Sun’s doing a lot better than before. When he first tested positive in 2015, he retreated to his hometown of Jilin, 400 kilometers away from Shenyang, believing it to be his “final home.”

I first met Ma Tiecheng 10 years ago. I was doing a photo project on transgender communities in China, and encountered Ma through his organization, now called China Love Aid. The organization, founded in 2005, mainly focuses on marginal populations, such as the LGBT community and transgender sex workers.

In China, most people get HIV tests from organizations like Ma’s, but they can’t offer medical advice. Following a positive test, a patient needs to go to a hospital to confirm the diagnosis and make a treatment plan. 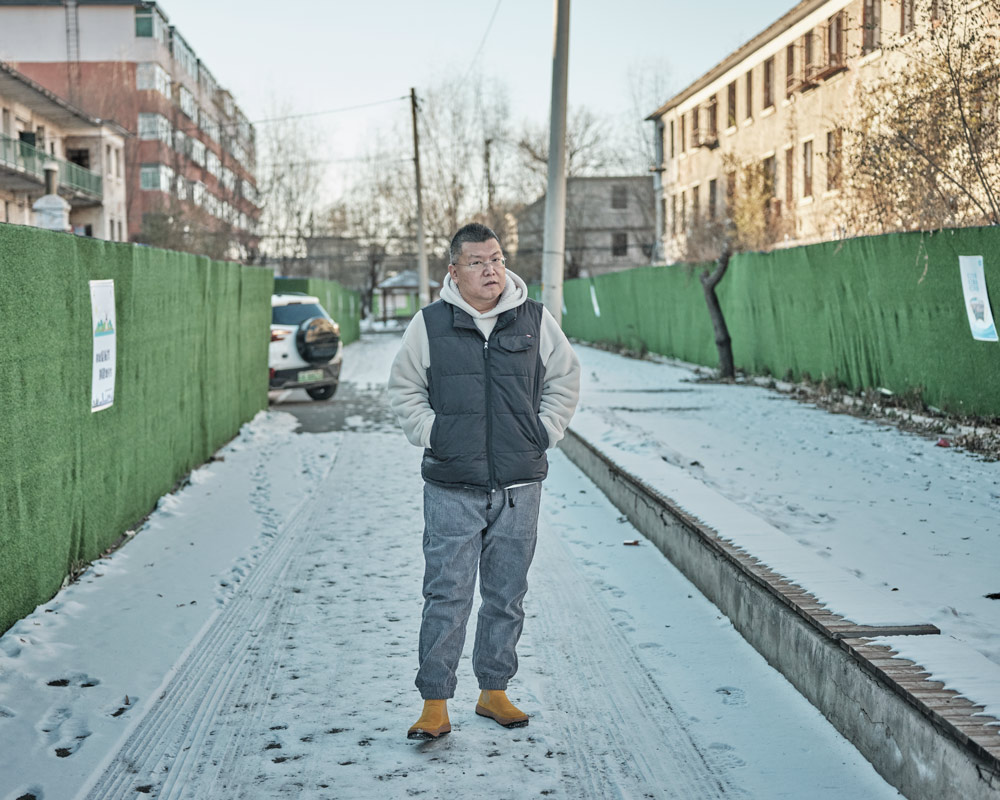 Whether out of fear, shame, or despair, many who test positive never turn up at the hospital, or disappear after their diagnosis, Ma said. Without treatment, the prognosis is grim. Within years or decades, the HIV virus will destroy the body’s immune system, meaning a treatable virus will eventually kill.

In 2003, Ma’s best friend disappeared after being diagnosed with HIV, and was never heard from again. Ma believes that if someone had told him that he could live a good life with HIV — and given him a good hug — his friend might have sought treatment. That’s why he founded China Love Aid.

Meanwhile, Sun told Sixth Tone that he spent his time at home struggling between facing the diagnosis and trying to escape it. “I just wanted someone I could trust to hold me,” Sun said.

Finally, he went to his best heterosexual friend and told her about his condition. Sun’s friend encouraged him to go to the hospital for diagnosis, and promised that she would accompany him throughout. After the diagnosis, Sun joined a local HIV NGO. A year later, he returned to Shenyang and continued his life. He met Ma, and in Ma’s organization, he felt that he was not alone.

“If things had been any different, I would have been pessimistic and just disappeared, like many infected people,” Sun says.

He’s no longer in touch with the woman who convinced him to get treatment. When Sun went back to Shenyang, she asked to break off contact, saying she was afraid she would have to watch him die.

Sun says that the condition had affected his life less than he thought it would. Whenever Sun has a date, he places his medicines on the guest table in his hall. He says he expects the other person to take the initiative to get to know him and his infection, rather than telling the other person in advance because he prefers to “leave his options open.”

Sun is still single. “Maybe it’s that I’m just not good at relationships,” he says. 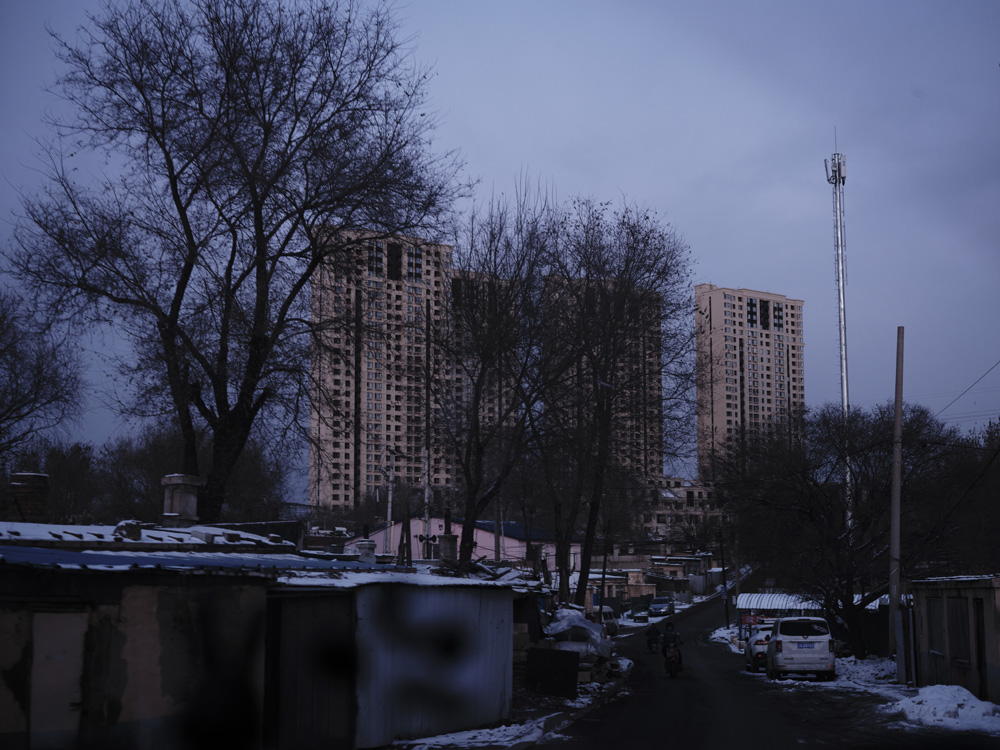 After dinner, Ma Tiecheng reminded Zhao and Sun to add each other’s WeChat. Then Sun says goodbye to us as if he had finished a day’s work. Driving back towards Zhao’s home, Ma asked Zhao what he thought of Sun. “We live in two different worlds,” says Zhao. Ma replies: he should see Sun again; maybe they’d grow on each other.

Giving up was so widespread in Ma’s cases through the years that he had come to feel that information and a good hug wasn’t enough. Instead, he says, it is about HIV patients being accepted by society, and by themselves. “At first, it seemed to be a personal problem, or something that could be solved with the help of organizations like us, but it was a social problem that needed the efforts of all people,” Ma explains.

The next day, Wu Shuang, one of Ma’s employees, invites us to dinner at her home after work. Ma had a mission there too: to persuade Wu to take her own HIV medicine.

Wu’s family lives in a 40-square-meter apartment across the street from Ma’s office, with a painted blue exterior wall that has now faded to light blue. 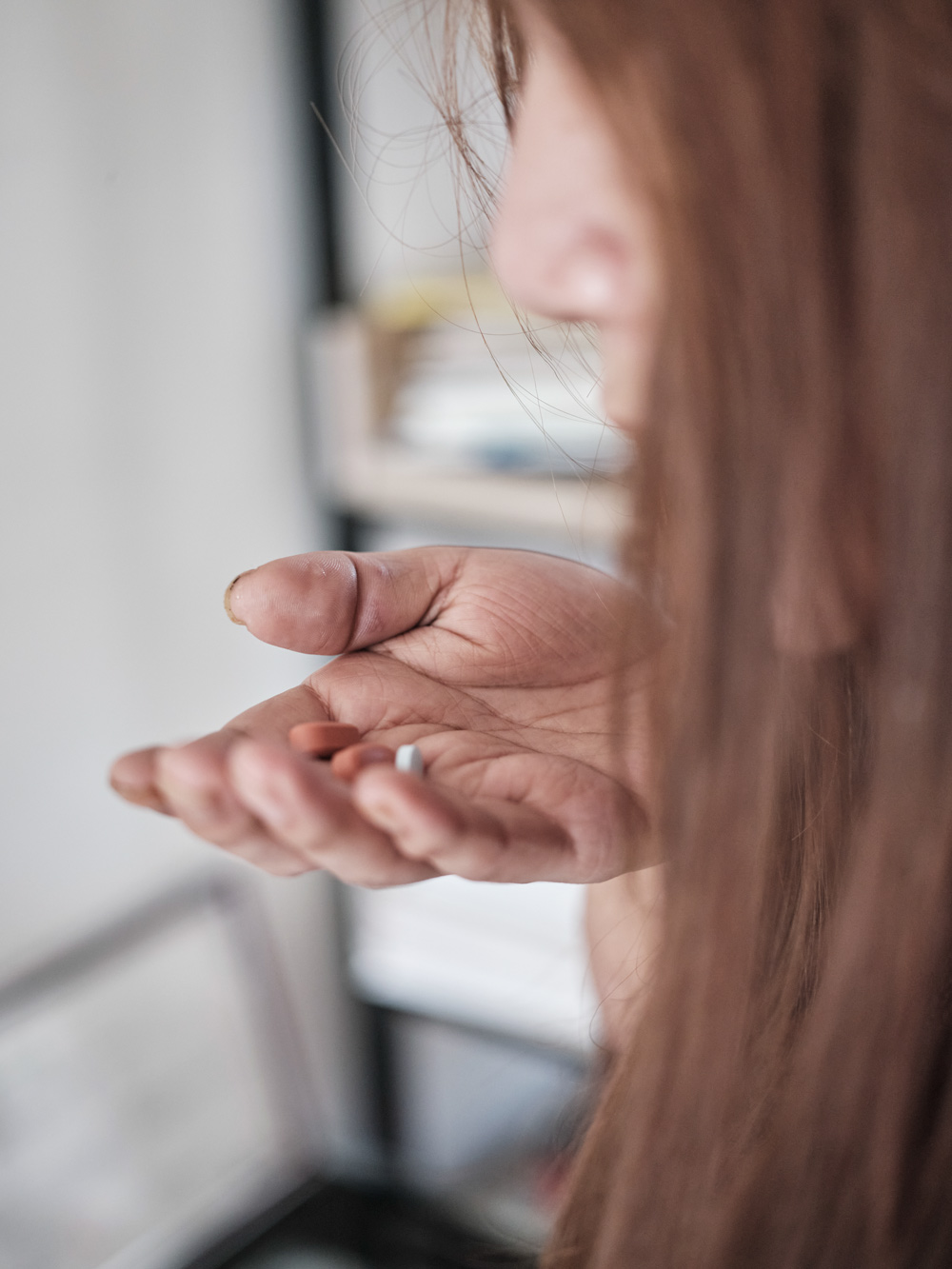 Wu, a transgender former sex worker, now works as Ma Tiecheng’s staff and manages the organization’s work with transgender people. Wu was diagnosed HIV positive several years ago and began treatment. But Wu often forgets to take her medicine, and has developed resistance to two of three compositions of drugs available in China. The side effects from her remaining options are worse than the two she continues to be prescribed.

It is Wu’s last chance. If she fails to get onto consistent treatment, her risk of developing AIDS will go from low to a near certainty.

Wu says that her problem is self-control. She wants to take the medicine, but she just can’t remember to.

Ma hopes Wu’s mother, with whom she lives, will make sure she takes the medicine, but her mother replies: “Just let her die. She chooses it.”

Wu’s mom stands up with her back to Ma and goes to the window to look out into the night. She might have ended similar conversations many times before, but where there was crying before, rings silence now instead. Outside the window, snow falls slowly on the empty road under the pale light. Before we left, Ma approaches Wu’s mother and pats her on the shoulder. “There’s still hope,” he says. 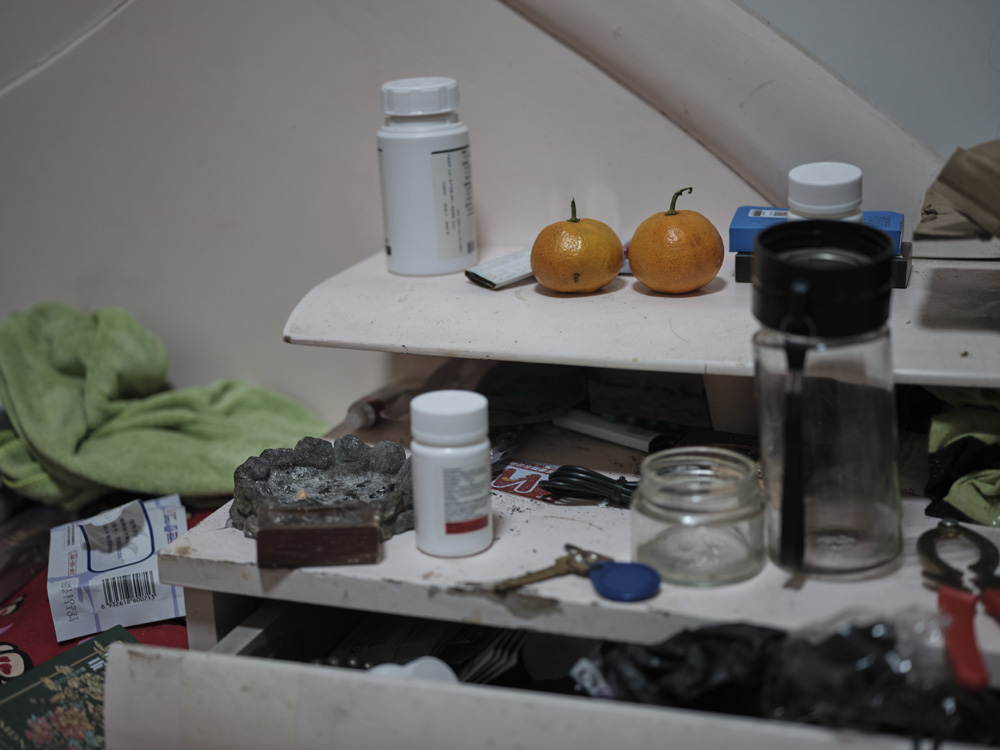 Outside, Ma loses his cool. “I can’t go to her apartment every day on time and choke her around the neck and feed her the medicine, can I?” he complains.

There are thousands of HIV positive people like Wu in Shenyang, at least, in Ma’s experience. They’ll lose years of life to lack of education, weak awareness of HIV prevention, or indifference to life.

“I want to solve it quickly, but I just can’t and feel powerless. It’s so complicated that I cannot solve it on my own or just with my organization. But…” Ma insists, “I will not give up, even if I can’t solve it now, I still believe there is hope, and there will be a solution one day.”