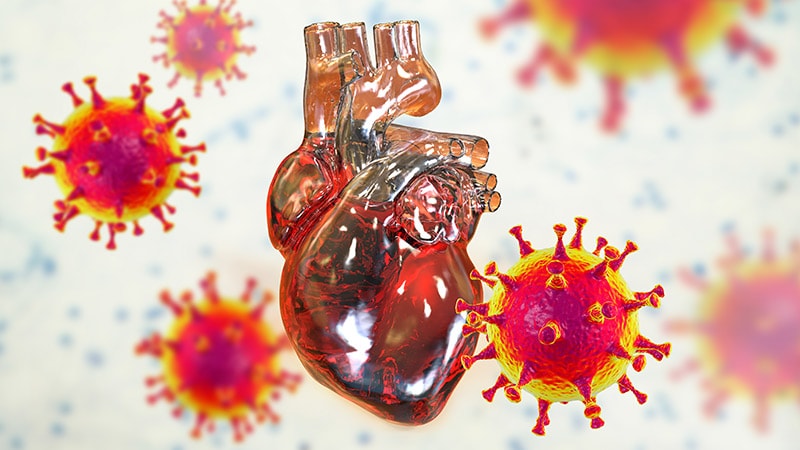 Extended anticoagulation with low-dose rivaroxaban (Xarelto, Bayer/Janssen) after hospitalization for COVID-19 may reduce the risk of venous thromboembolism (VTE) without worsening the risk of bleeding in patients who had been considered high-risk for VTE, a multicenter randomized trial suggests.

The primary efficacy outcome occurred in five (3%) patients assigned to rivaroxaban and 15 (9%) of those who received no anticoagulation after discharge, a significant difference. The 320-patient trial was open-label.

The benefit amounted to a two-thirds drop in risk for the group treated with rivaroxaban, with a relative risk (RR) of 0.33 (95% CI, 0.13 – 0.90; P = .029) and number needed to treat of 16 to prevent one event. The finding was driven mainly by excess pulmonary embolism in the control group, which accounted for three deaths.

No major bleeding by International Society on Thrombosis and Hemostasis criteria occurred in either group. Incidences of clinically relevant nonmajor bleeding were similar, at two events in both groups of the MICHELLE study, results of which were published December 15 in The Lancet.

As to whether the results can be extrapolated to other direct oral anticoagulants — such as apixaban (Eliquis, Pfizer/Bristol-Myers Squibb), dabigatran (Pradaxa, Boehringer-Ingelheim), or edoxaban (Lixiana/Savaysa, Daiichi-Sankyo) — “the answer is no, they’re different,” Ramacciotti said.

“We strongly advocate to keep what we found in this study and we studied rivaroxaban, we didn’t study other DOACs. We don’t believe it is a class effect.”

MICHELE was inspired by the large number of pulmonary emboli cases they were seeing after COVID-19 hospital discharge, and by conflicting recommendations about the role of post-discharge extended duration antithrombotic prophylaxis, he said. Though there’s emerging consensus about the optimal dose of in-hospital heparin, there’s no consensus on extended thromboprophylaxis after discharge.

The trial randomly assigned 318 patients treated for at least 3 days with standard heparin thromboprophylaxis during hospitalization with COVID-19 to receive, at hospital discharge, rivaroxaban (10 mg once daily) or no anticoagulation for 35 days.

Notably, the study excluded patients with risk factors for bleeding, such as thrombocytopenia, renal failure, recent bleeds or surgery, gastric ulcers, or taking aspirin or clopidogrel.

“We narrowed it down,” acknowledged Ramacciotti. “So we believe that half of patients who are discharged from the hospital would qualify to receive thromboprophylaxis with rivaroxaban. This is an important message. It’s not for all patients but for this very specific group of patients at high risk for thromboembolic events and low risk of bleeding.”

Strengths of the MICHELLE trial include the randomized design, enrollment across 14 sites, which increases its generalizability, and the use of low-dose rivaroxaban appropriate for this phase of treatment, Charlotte Bradbury, MD, University of Bristol, England, and Zoe McQuilten, MD, Monash University, Melbourne, Australia, say in an accompanying editorial.

They point out that in the ACTION trial, therapeutic-dose rivaroxaban in-hospital and post-discharge for 30 days was not superior to prophylactic-dose heparin and was associated with a higher risk of bleeding.

Limitations of the MICHELLE trial, they say, are the open-label design, relatively small sample size, and that more scans were done in the rivaroxaban group, possibly increasing the number of VTE diagnoses.

A further limitation was that the primary outcome included asymptomatic VTE, subsegmental pulmonary embolism, and distal thrombosis of less clear significance. That said, the secondary efficacy endpoint of symptomatic and fatal VTE was reduced with rivaroxaban (RR, 0.13; 95% CI, 0.02 – 0.99; P = .049), the editorialists point out.

“These results are encouraging, but in view of the small size of this trial, clinicians are likely to wait for results from other ongoing trials…evaluating post-discharge thromboprophylaxis before changing standard practice and guideline recommendations,” Bradbury and McQuilten conclude. Those trials, they write, include HEAL-COVID, ACTIV-4c, XACT, and one cataloged as NCT04508439.

MICHELLE was supported by Science Valley Research Institute Brazil and Bayer, which provided the study drug and partial financial support. Ramacciotti reported grants and consulting fees from Bayer and Pfizer; grants from the Brazilian Ministry of Science and Technology; and personal fees from Aspen Pharma, Biomm Pharma, and Daiichi Sankyo outside of the submitted work. Bradbury has received speaker’s fees from Bayer for nonpromotional education and conference funding from Bayer to present research data unrelated to rivaroxaban. She also reported speaker’s fees from Amgen, Bristol Myers Squibb/ Pfizer Alliance, Janssen, Eli Lilly, and Novartis; support to attend conferences from Amgen and Novartis; and advisory fees from Ablynx, Bristol Myers Squibb/ Pfizer Alliance, Lilly, Novartis, and Portola. McQuilten has disclosed no relevant financial relationships.