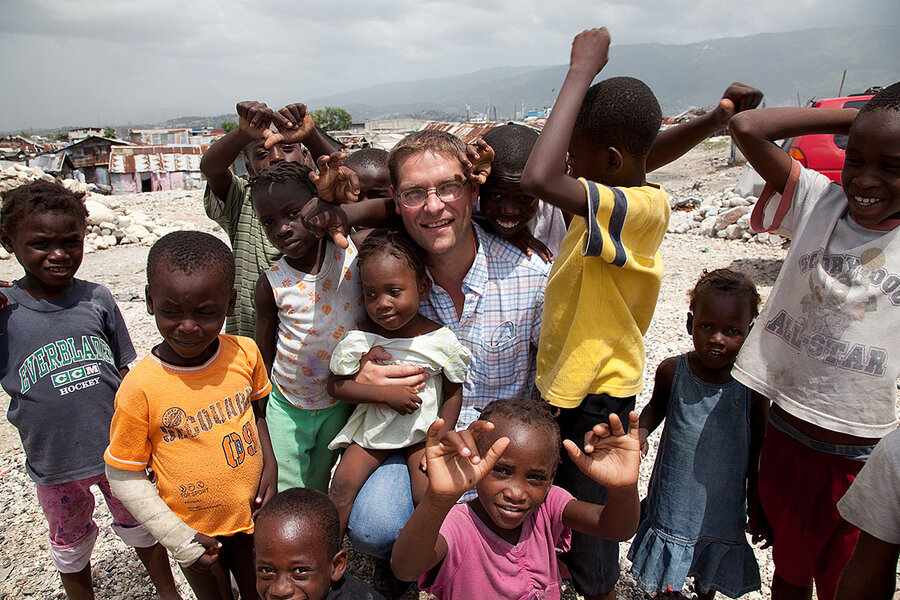 The idea behind Mary’s Meals, a global charity that delivers more than 2 million meals a day to schoolchildren in 19 of the world’s poorest countries, is a simple one:

In a world with nearly 60 million primary-school-age kids out of school, and many millions more living in extreme poverty, take on those two challenges together. Kids getting a healthy lunch won’t go hungry, and getting that meal at school will allow them to keep studying instead of having to turn to menial jobs to fill a gnawing belly.

Why We Wrote This
It’s not a novel idea, but it’s a powerful one: A good meal can fortify a hungry child’s endurance at school. But a Scottish salmon farmer’s global charity sees lunch as a vehicle to tackle poverty as well.

Scottish salmon farmer Magnus MacFarlane-Barrow, founder of Mary’s Meals, says if the world is serious about ending hunger, the international community must provide leadership. “We should have defeated long ago the notion that hunger is acceptable anywhere,” he says.

Moses Tumah, a community organizer for Mary’s Meals in Liberia, survived the civil war there as a small boy by fleeing his village to the capital, Monrovia. When he returned home, his village had been burned down, and there was no money for school or food.

Mary’s Meals arrived a year later, and changed his life, he says. “That one meal a day gave us hope, and made it possible for us to graduate from high school.”

When Magnus MacFarlane-Barrow took a week off from salmon farming in 1992 to drive donated food and supplies across Europe to war refugees in a disintegrating Yugoslavia, he told himself it would be a one-and-done.

But when Mr. MacFarlane-Barrow returned to the corrugated-metal shed he called home, he discovered a front porch piled high with canned goods, warm clothing, blankets, and more. Neighbors and strangers had learned of his mission to families living through war in a distant part of Europe. And they had kept on giving.

Why We Wrote This
It’s not a novel idea, but it’s a powerful one: A good meal can fortify a hungry child’s endurance at school. But a Scottish salmon farmer’s global charity sees lunch as a vehicle to tackle poverty as well.

“I looked at that mountain of stuff, and the thought came to me that God had a very different plan for me. It seemed I wasn’t quite done,” he says.

And indeed he was not. Today Mr. MacFarlane-Barrow is founder and CEO of Mary’s Meals, a charity based in Dalmally, Scotland, that delivers more than 2 million meals a day to schoolchildren in 19 of the world’s poorest countries, from Eastern Europe to West Africa and Southeast Asia.

The one-time salmon farmer’s brainchild has even managed to continue providing meals to schoolkids in an increasingly unstable Ethiopia as it slips toward civil war – including in the besieged Tigray region. (Since July, Tigray has been under a humanitarian blockade imposed by the government in Addis Ababa.)

Hunger and poverty, togetherThe idea behind Mary’s Meals is a simple one: In a world with widespread hunger, and nearly 60 million primary-school-age kids out of school, according to UNICEF, and many millions more living in extreme poverty, take on those challenges together.

To reduce child hunger and tackle poverty at the same time, provide kids with a healthy lunch at school. Kids getting at least one solid meal a day won’t go hungry, and getting that meal at school will allow them to keep studying instead of having to turn to menial jobs to fill a gnawing belly.

Moreover, kids who stay in school longer are likely to have a better chance of getting a good job and pulling themselves out of poverty.

Mary and Angelina, two recent nursing school graduates in South Sudan, were able to stay in primary school and continue to high school once Mary’s Meals arrived in their schools.

Indeed, it was a boy named Edward who sparked the idea for Mary’s Meals. Mr. MacFarlane-Barrow met him while delivering food to Malawi in 2002. When asked about his dreams for the future, Edward said simply: to have enough food to allow him to go to school.

The spread of Mary’s Meals around the globe and evidence that its approach is making a difference in hundreds of thousands of young lives has put the organization on the international hunger-reduction map and earned its founder accolades.

In 2015, Time magazine named Mr. MacFarlane-Barrow to its list of 100 people making a difference.

Lives transformedStill, the erstwhile salmon farmer says what inspires him are the many young people who take a simple thing – a meal a day they get at school – and make it the basis of a life transformation out of hunger and poverty, and often into once-unimaginable careers.

He speaks of Veronica, an orphaned girl who was among the first 200 children Mary’s Meals fed in Malawi. Today Veronica has a degree in education and teaches in a college.

And there is Moses Tumah, who as a small boy survived Liberia’s civil war by running away from his war-torn native province of Bomi for the capital Monrovia. When peace allowed him to return to Bomi in 2005, his village had been burned down, and there was no money for school or food.

But the arrival of Mary’s Meals a year later allowed Moses to go to school and stay enrolled, rather than leaving to figure out a way to eat and stay alive. The assurance of a meal as part of every school day changed his life, Moses says.

“A lot of us at the time had no money, but that one meal a day gave us hope, and made it possible for us to graduate from high school,” he says.

Today Moses works for Mary’s Meals in Bomi province as a community coordinator, going out into the field to expand the program’s reach to new schools by developing the local teams that prepare and deliver the food Mary’s Meals provides.

Liberian Moses Tumah was able to stay in school in the post-civil war years in his native Bomi region because Mary’s Meals came to his school. He now works for Mary’s Meals in Bomi, training communities to prepare the meals going into their schools.

And although Moses is speaking on the phone, one can hear the pride in his voice when he offers the fact that today Mary’s Meals serves 124,000 children in Bomi and surrounding areas – and the number continues to grow.

“We know there are parents who can’t afford a morning meal for their children,” he says. “But when I see them bringing their children to school knowing that by 10 a.m. they will have something to eat so they can do their school work, it is what makes me want to reach more children and schools.”

Mr. MacFarlane-Barrow concurs that it is the individual stories that inspire him and keep Mary’s Meals going.

But these days he is looking beyond his own organization to the bigger picture. From his shed in Scotland, he says he is now “dipping a toe” into the question of what it would actually take to end hunger by 2030 – one of the United Nations’ 17 Sustainable Development Goals adopted by the international community in 2015.

Moral dutyAnd here, too, Mr. MacFarlane-Barrow has an idea. If the world is serious about ending hunger, he says, the international community should pursue an urgent we’re-all-in-this-together project mirroring the intentions (if not the practice) of the global response to the COVID-19 pandemic.

“We should have defeated long ago the notion that hunger is acceptable anywhere,” he says. “But here we are going backwards, with hunger crises developing in so many places, from Zimbabwe to Haiti,” he adds. “Even in India, a huge country that had made such progress.”

He could have added Afghanistan, where aid experts say as many as 1 million children could perish this winter as a result of international assistance drying up in the wake of the Taliban’s return to power this past summer.

Mr. MacFarlane-Barrow says he understands that hunger has “slipped off the agenda” as the pandemic has diverted global attention. “I get it, leaders are preoccupied with addressing this terrible new problem at home first,” he says.

But he says that the same sense of moral duty that was part of what spurred world leaders to meet in forums like the G20 or to create COVAX, the global vaccine initiative, to address the pandemic collectively, should also prompt a serious global campaign to end hunger.

“I’m just a simple salmon farmer working from a shed in Scotland,” Mr. MacFarlane-Barrow says. “But if there’s one thing I’ve learned” – starting way back with those piles of donated goods on his shed porch – “it’s that there’s an overwhelming generosity inside most people.”

“People want to support a cause so basic and human as ending hunger,” he adds, “but they need some leadership that says, ‘We can do this!’ and then points the way to getting it done.”