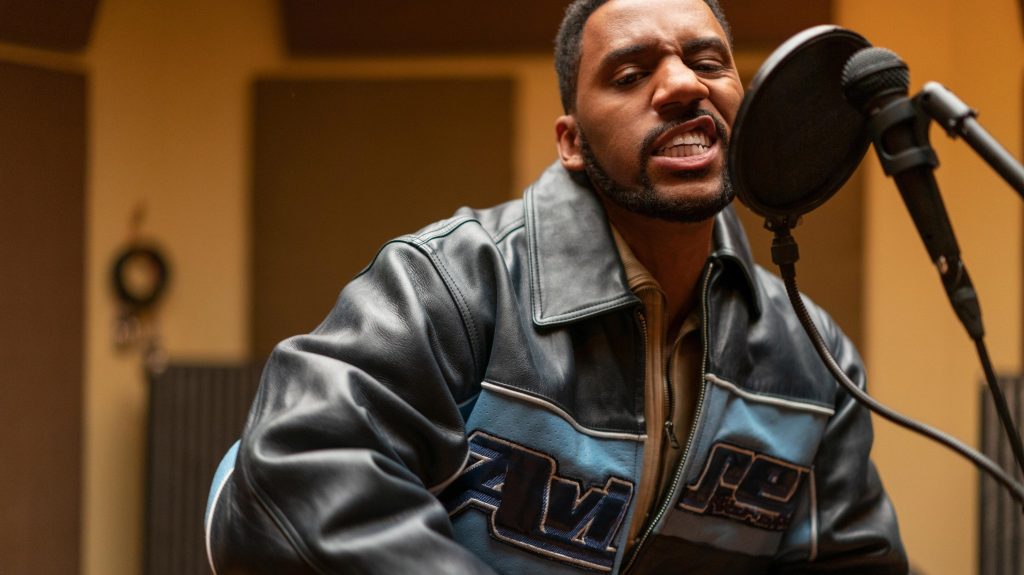 When Hulu’s now-smash series Wu-Tang: An American Saga debuted in September 2019, viewers were immediately drawn to the character Dennis Coles, aka D-Love, but most recognizable as legendary rapper and founding member of the Wu-Tang Clan, Ghostface Killah.

Siddiq Saunderson nails his portrayal of the crack dealing 19-year-old responsible for caring for his two physically disabled younger brothers in Staten Island, New York’s violent and poverty-stricken Stapleton Houses during the early ‘90s. Exacerbated by the stress of an alcoholic mother, an ongoing beef with rival Sha/Raekwon (played by Shameik Moore), and a complicated relationship with his best friend Bobby/RZA’s (played by Ashton Sanders) sister Shurrie (Zolee Griggs), needless to say, Dennis is the archetypal angry Black man always ready to pop off, both figuratively and literally.

Whether he’s sticking up one of his Wall Street customers for a Rolex he fails to realize is fake or drunkenly storming the set of Bobby’s “Ohh I Love You Rakeem” video shoot, Dennis is impulsive, hot-blooded, and sometimes dangerous. Still, he possesses a paradoxical sweet and street quality that endears him to fans.

During the rare instances that he reveals his vulnerable side, be it booed up with his girl or watching old kung-fu movies with his brothers, there’s depth beneath the surface of his rock-hard exterior. Balancing this unique duality is key to convincingly depicting the dynamism of Dennis and something rookie actor Saunderson explains he’s able to do by “honoring the duality that exists within [him]self.”

A graduate of Carnegie Mellon University, the 25-year-old Brooklyn native describes himself as an artist, who is “really passionate about the craft of acting and storytelling.” His growing resume includes roles as Mercutio in the indie drama R#J, a Gen-Z adaptation of Romeo and Juliet, which premiered at The Sundance Film Festival earlier this year, in addition to appearances on BET’s Boomerang and Netflix’s Messiah.

The promising talent spoke to VIBE about the importance of brotherhood both on and off the set of Wu-Tang: An American Saga, his musical influences, endeavors, and the intrinsic values he shares with his character Dennis and the real-life Ghostface Killah. In this case, we’re not sure if life imitates art or vice versa, but either way, we’re down for the ride and Saddiq Saunderson is behind the wheel.

VIBE: Where are you from?

Saddiq: I was born and raised in Brooklyn. Been here ever since. We never had a reason to go anywhere else, so far.

Prior to this role, were you a Wu-Tang fan, and specifically, were you a fan of Ghostface Killah?

Prior to the show, I knew about Wu-Tang. I was a fan of certain songs that I knew. “Method Man” and “C.R.E.A.M.,” stuff like that. But I wasn’t a huge fan of the group because I was unaware of their music. I had the other ’90s artists that I was really raised on, and Wu-Tang wasn’t necessarily one of them. But thankfully, being a part of the show, I got more hip to their music and their solo albums. And I’ve definitely grown an appreciation for what they’ve done for the culture.

Who are some of the artists that you were fans of or inspired by during the ’90s?

I was really young, but growing up with my mom, she would always play Slick Rick, early Jay-Z, the Fugees, A Tribe Called Quest, Digable Planets, just to name a couple.

How did you end up playing Ghostface Killah?

I had to audition, like most actors that are young and just starting out. Actually, I initially auditioned for Bobby, and they were like, “Oh, you would probably make a good Dennis.” I met with some of the producers, and I met RZA. I connected with RZA on this level, and I really felt like this role is mine. And that’s how the process started. It was me eventually becoming Dennis and playing Ghostface Killah.

In retrospect, do you think that Dennis/D-Love/Ghostface is a better fit for you than RZA?

Absolutely. I think things happen the way that they’re meant to happen. I think that my energy lends itself more towards Ghostface Killah than anybody. Not even if I would’ve auditioned for Inspectah Deck—it would’ve been the same thing. I don’t think I was meant to play any other role besides the one that I was given.

There’s just a lot of similarities in the way that we value family, and loyalty, and honor. Those values of his really line up with my values, as well. I go about them a little bit differently at times, but for the most part, I didn’t have a hard time understanding why he reacted the way that he reacted in certain situations.

Especially in Season 1, when a lot of the fans were like, “D-Love, he be buggin’ out! He always barkin’ on people!” And in my mind, I’m like, “Yeah, because they deserved it!” They did something that is not honorable, or they’re doing something that’s very suspect to somebody they are supposed to be close with. So, I completely understand him. I always understood where he’s coming from.

Talk a bit about the importance of brotherhood to Dennis’s character in terms of his relationship with his two real-life brothers and his friendships with the Clan.

Brotherhood is just really important in life, and doing right by people who do right by you. That is very important to Dennis, and that is why when he feels he’s being betrayed, he’s really passionate about that. He feels that pain, whether it manifests itself in anger and frustration, or manifests itself in distance, like, “Nah, I’m not fu*king with y’all.” He holds that very high, and I think that has to do with the relationship that he has with his actual brothers, and how he was their caretaker.

He cared for a lot of people and had a lot of responsibility at such a young age, so I think it’s just something that I can relate to as well. Having that responsibility of somebody being under your care, there’s a loyalty, there’s a bond that you feel with those people that you’re willing to stick your neck out on the line for them. So, when that’s not reciprocated, again, there’s a hurt, an anger, an aggression that I think is warranted.

When the cast performed “7th Chamber” during the Season 1 finale, viewers saw the group come together in a definitive way and, for the first time, got a glimpse of the vision of Wu-Tang. What was that experience like?

That was a live performance, I was not lip-syncing. There’s something about live performance and the rawness of feeling the scene and going into the verses that makes everything come together and come to life. When you’re in the performance mode, that’s when I feel like I commit the most when the cameras are rolling. And I commit in the studio, too. I try to honor the script as much as I can and honor the version of the story that we are telling.

I grew up in Brooklyn, so there’s a part of me that always grew up listening to Hip-Hop. That’s just embedded in the culture that we have in New York. I remember being really young, and going to a Slick Rick concert with my brother and my mom, and rapping along with “Children’s Story” and “Mona Lisa” and “La Di Da Di,” so, I have experience in that regard. If anything, the show has inspired me to get more in tune with the music in general. I don’t know if it is necessarily rap, because I do sing a bit. I do some R&B. I like R&B/alternative/house music.

Eventually, I think I’ll come out with a track, but it would be something that I would want to do for me. Not just, “Now I’m on Wu-Tang,” and all of a sudden, I’m trying to be this Hip-Hop star. That’s not really my vibe because acting comes first for me. I really consider myself an artist, and I’m really passionate about the craft of acting and storytelling. But I’ve always been interested in music. I’ve always been an artist in general. So, you may look up one day, and I might have a track out with an alias so that people don’t know it’s me!

What can fans look forward to seeing on Wu-Tang: An American Saga?

Moving forward, I’m really excited for the audience to see how the brothers come together. The music is the glue that sticks everybody together and gets everybody, not on the same exact page, but on a similar enough page where something like [Enter the Wu-Tang] 36 Chambers could be made and be the iconic album that it is in history.

This interview has been edited for length and clarity.

Wu-Tang: An American Saga Seasons 1 and 2 are available to stream now on Hulu.

Tune in with VIBE on Wednesdays for upcoming interviews with the cast and crew.