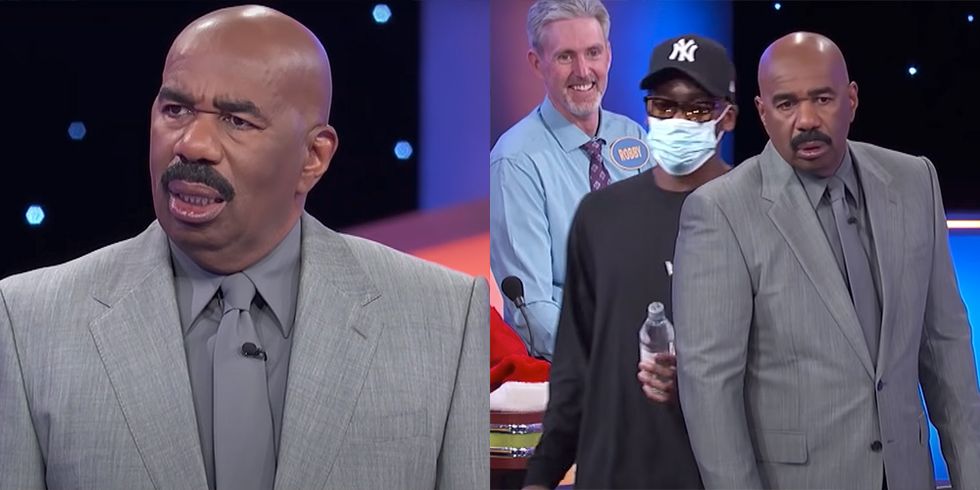 Recently, Steve had an “outburst” when the filming of a Family Feud episode went hilariously wrong. Steve’s stylist, Elly Karamoh, walked on stage to deliver Steve a bottle of water. There was only one issue: unbeknownst to Elly, they were in the middle of filming an episode.

“Elly, what are you doing?” someone off-stage can be heard asking. Upon realizing his mistake, Elly quickly scooted off the stage. Steve and his film crew were in complete shock. But as surprising as it was, Steve’s reaction made for great television. Steve simply stared at Elly for a long time after he made his way of the stage. Steve then jokingly yelled, “What the f–k is wrong with you?!”

When Elly replied that he didn’t realize they were taping, Steve quickly shot back, “What the f–k do you think these lights are for?” Poor Elly! Of course, we all know that Steve was just messing around to make the audience laugh. Turns out, it worked.

“Steve’s stylist deserves a raise after this! Lol 😂 😂 😂 ,” one fan wrote after watching the hilarious moment on Youtube. “This is the most hilarious thing I’ve ever seen in my whole life! I can’t stop laughing with earphone[s] on and my brother thinking i’m crazy. This definitely went to youtube and Steve’s stylist gonna be famous,” another said.

Thanks to Steve, 45 years later Family Feud is still a popular game show. Since Steve took over hosting in 2010, his hilarious reactions and the show’s contestants have inspired countless memes, tweets and TikToks. Put simply, Steve’s amazing comedic timing can’t be beat.