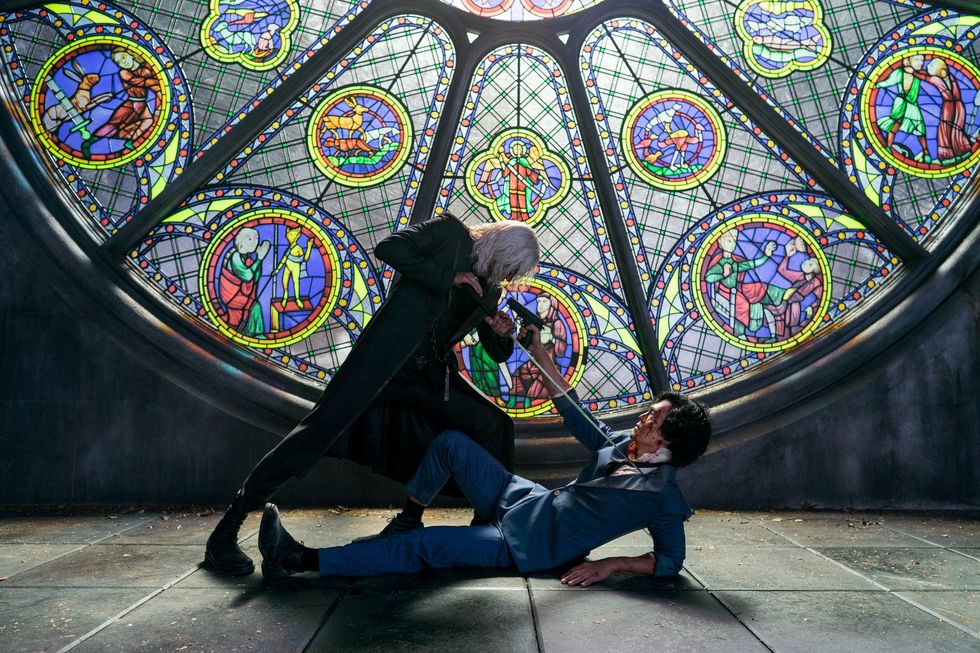 The following story contains spoilers for the ending of Cowboy Bebop Season 1.

For it’s next trick, Netflix is bringing a few old genre favorites—sci-fi and western—together, adapting the beloved anime Cowboy Bebop to live-action. The hope, we presume, is that a new version of that same story of space bounty hunters and a mysterious past will capture the same magic; the original Bebop was released more than 20 years ago, and the fandom remains as committed as ever.

And while the reaction to the series thus far has been polarizing, there’s little question that the live-action Cowboy Bebop ends in a place where viewers who find themself into it will be very eager for Season 1. The show does a wonderful job of bringing all of its loose threads together for a big finale that pays those threads off—not long before throwing those threads out the window, shuffling its deck and preparing for what could end up being an even more exciting season 2.

Cowboy Bebop feels, in a lot of ways, like the first post-Mandalorian show. Like the old westerns both shows seem to be modeled on, Cowboy Bebop mostly takes on an episodic, story-of-the-week structure. While there’s an overarching thread that links everything together—and makes for tension that pays off in the finale—much of the show’s substance comes in character moments, where Spike Spiegel (John Cho), Jet Black (Mustafa Shakir), and Faye Valentine (Daniella Pineda) grow together while managing to make a plan for whatever bounty is in their sights at that given moment.

So, therefore, it’s not super hard to recap where the whole story stands before the very end of the season. In a nutshell: Spike and Jet are partners, and Faye later catches on with them after a few coincidental run-ins. Spike has a mysterious past that Jet doesn’t know about (the two linked up and started working together after Spike saved Jet’s life). This past? Spike used to be a hitman for the mysterious Syndicate, a crime organization run by a board of three elders.

All the meanwhile, we check in throughout the season with a simultaneous storyline focused on the aforementioned syndicate. The most notable figures here are an unhinged, violent man with long white hair named Vicious (Alex Hassell) and his wife, Julia (Elena Satine). Vicious is power-hungry, but often put into place by the Syndicate’s elders, one of whom is revealed to be his father. We also learn after not much time that Spike’s old name is Fearless, and he’s believed dead by the Syndicate after Vicious tried to kill him (also in this flashback episode: an extremely badass sequence that basically finds John Cho going full John Wick). Fearless/Spike, you see, had a love connection with Julia, and this made Vicious very, very jealous. Vicious told Spike that Julia chose to be with Vicious, despite their spark. When Spike survived the attempt on his life, he decided to begin a new life under a new name.

This is probably a good time for me to admit that I’m a new fan to the Cowboy Bebop world. Surely there’s more context available elsewhere with regard to the already-established anime story, and it’s certainly possible that eventually I take the plunge and watch the whole thing (I’ve only ever seen the first episode). But for the purposes of this story and this breakdown, I’m going only on what I’ve seen in the show and a rudimentary understanding of the anime.

So, that being said, there’s still plenty to talk about. Let’s get into it.

Who was that kid at the end of Cowboy Bebop Season 1?

Probably the question you’re most wondering: who was the kid who found Spike at the very end of the season? As I made clear above, I’m far from an expert on the Cowboy Bebop anime—I haven’t watched, but perhaps will in the near future—but I do know that the kid featured in the ending here is Ed—full name Edward “Radical Ed” Wong Hau Pepelu Tivruski IV—a classic character from the Cowboy Bebop anime.

After an unspecified amount of time has passed after Spike’s unceremonious parting with Jet Black (and inexplicable survival of being shot and falling from a very high distance), our hero is exiting a bar and is quite drunk. So drunk, in fact, that he passes out, falling on his own face in a back alley. And in that back alley, an unfamiliar voice shouts his name: “SPIKE! SPIKE SPIEGEL!”

Ed, appears, and says he has a bounty that Spike—a famed bounty hunter—can help him with. He references both “The Butterfly Man” and “Volaju”; these are references to Vincent Volaju, a villain in the anime who will clearly be a key character in Season 2, if there is one.

Let’s backtrack some here. From the moment earlier in the season that Vicious found out Fearless/Spike was alive, you knew there was going to be drama. When Julia figured out he was alive, clearly that was going to build toward something as well. And this al comes together in a major way in the finale.

After an epic battle between Vicious and “Fearless”—the two who once considered each other brothers—Spike is the last man standing when Julia shoots Vicious. But here’s where our first twist comes: rather than wanting to leave with Spike and move on with life, Julia wants to stay, get rid of Vicious, and run the Syndicate. She’s mad at Spike for not pursuing her all these years, and leaving her to suffer at the hands of that mad man.

The years have done their damage; Julia isn’t the same person she was when she and Spike first met. She doesn’t want a happy ending; like the femme fatale she’s always been set up as, she’s now grabbing at the power she knows she can get (more on that a bit below). While she’s thought lovingly about Spike for a long time, this experience has changed her, and she now feels like she needs to fend for herself. She doesn’t trust anyone, and why should she? She says that Spike is a dream she needs to wake up from, and shoots him. He falls through the window into a body of water. Spike, presumed dead again? Seems like his resting state.

Poor Jet Black. Before I get into any character stuff, I do just want to say that Mustafa Shakir is really great in this role; he’s got that gruff exterior, but especially by the end of the series you do get the idea that he cares about the people in his orbit, and feels hurt when the life around him moves on without him.

Which is a good segue to where we leave Jet. His daughter, Kimmie, has been saved from Vicious and the Syndicate’s clutches with the help of Spike and Faye, and they’re back together briefly. But Kimmie’s mom and stepdad come soon, and Jet Black is left momentarily alone. Faye Valentine, who’s become just as close with Jet as Spike was before her arrival, has to leave to do some self-discovery (we’ll get there). And Jet feels utterly betrayed by Spike; he thought his partner was a war hero, but he’s really a former criminal hitman. Stark difference!

So poor Jet, such a nice man with a ton of warmth and love to share, is left alone. Faye is off on a new journey, and he has no particular interest in seeing Spike. Their future is back together as a gang, but it’l be a long time until we get there.

Faye’s conclusion in Season 1 is a cap on her entire first season. What we know about Faye is that “Faye Valentine” isn’t her real name; she was frozen, and woke up with total amnesia. She knows who she is, but she doesn’t know who she is. That’s until she finds a video cassette of herself in her youth; she uses some technology, and a little snooping to figure out the location of the video, and also hears the voice of her real, biological mother (she previously considered a con artist a “mother figure” as part of We’re The Millers-esque scams, but that’s not quite the same).

She heads out to look for this past at Jet Black’s encouragement.

Julia and Vicious find themselves in basically the opposite positions of where they began all of this. With the Elders all dead, Vicious thought he was claiming control of the Syndicate for himself, and taking out Fearless would just be a stop on his road to glory. That didn’t go as planned. He survived being shot by Julia, but she’s now power hungry—as we heard before she shot Spike—and has him locked up in a boiler room.

She’ll keep him alive (for now), and maybe even technically in charge. As she points out, no one can see the Elders (remember Vicious’ father and his big mask). So if Julia is just the voice of the Elders, and he’s locked up for no one else to see or hear, well, that’s tough luck for ol’ Vicious.

For funzies, it seems like Julia is going to play a little game of Russian Roulette with Vicious every day. Why not? Can’t think of a better candidate for that sort of game, huh? If Cowboy Bebop lands a Season 2, these are two characters we’re very eager to check back in on.