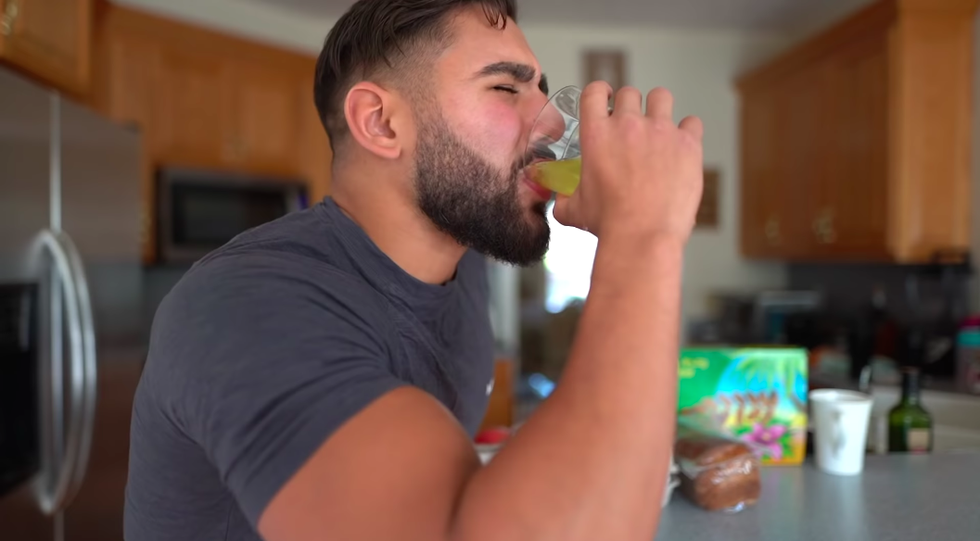 Bodybuilder and YouTuber Aseel Soueid has eaten and worked out like some of the fittest people in sports and showbusiness, from NBA legend Michael Jordan to WWE star-turned-actor John Cena. In his latest video, Soueid spends a day following the extremely specific diet plan that Stallone recently described as having followed to dramatically lean down to just 2.9 percent body fat during the filming of Rocky III.

For breakfast, Soueid starts off with just one small oatmeal and brown rice cookie, and a cup of black coffee with honey and a scoop of amino acids. This is shortly followed by a slightly more substantial pre-workout meal: an omelet made with 3 egg whites and a whole egg, and Irish oatmeal with mango and dates, one slice of bread, and more coffee. And as this is a Rocky-inspired diet challenge, Soueid decides to recreate the infamous moment in which Stallone drinks raw eggs on screen… and it does not go well.

The third meal consists of chicken breast, summer squash, and salad, with another cup of black coffee and honey (Stallone reportedly drank up to 25 cups per day). “I’m officially a fan of summer squash,” says Soeuid. “It’s going to add tons of volume to your meals, and it’s also super low calorie, so you eat tons of it, fill yourself up, and it’s not going to chip away at your physique, so I can see why Rocky inclides this in his diet. It does not go well with coffee and honey though. Definitely not.”

For the fourth meal, Soueid eats grilled tilapia on a sandwich with nothing but lettuce, a dry and stodgy dining experience which he describes as “miserable.” He follows this with one final cup of coffee and one more oatmeal cookie, bringing his total food intake for the day to just shy of 2,000 calories.