Just going to make a bold statement here: with all due respect to Halloween, Friday the 13th, Nightmare on Elm Street, and any other worthy contender, the Scream movies are our greatest and most consistent horror franchise. That may be kind of a funny thing to think about, considering the entire premise of the Scream movies is the meta, self-referential relationship they have with basically all of those franchise we just named. But where those movies all tend to fall off a bit in one way or another, the Scream movies, really, are consistently funny and scary to the point where if you’re a fan of the series, you’re never going to have a bad time watching (or re-watching).

Now, with the aptly-titled Scream—the fifth installment in the long-running franchise—coming to theaters, it’s as great a time as ever to watch each existing movie in the slasher franchise. Whether it’s your first time watching, and you only know Sidney Prescott (Neve Campbell), Gale Weathers (Courteney Cox), and Dewey Riley(David Arquette) from their spoof versions in Scary Movie or you’ve watched each Scream installment 100 times each, it’s good to know that you can watch every movie in the delightful horror movie world of Woodsboro right now—and you’ll have options on where to stream.

Another good thing about the Scream movies? None of them are all that long, so it lends itself really nicely to some marathon movie nights or serial binge viewing.

So, now’s your chance: start making some popcorn and queue up a scary movie. You’ve just got to hope that a phone call from Ghostface doesn’t interrupt those plans before they even start.

While every movie in the franchise is good, there will never be a better Scream movie than the original Scream. Director Wes Craven experimented with meta, self-referential horror a few years prior with his reimagined Freddy Krueger movie New Nightmare, but Scream was a sensation from top to bottom, clearly—they wouldn’t still be making sequels 26 years later unless that was unequivocally the case. Come for the scares and the laughs, and stay for the perfect cast, obviously featuring Campbell, Arquette, and Cox, but also with dynamite turns from Drew Barrymore, Rose McGowan, Skeet Ulrich, Matthew Lillard, Jamie Kennedy, and even Henry Winkler.

Horror sequels can get a bad rap, and sometimes that rap is warranted—sorry Halloween Kills—but it’s certainly not the case with Scream 2, which captured the same energy as the original while following Sidney Prescott to college. The supporting cast here is really just stunningly stacked: Jada Pinkett, Sarah Michelle Gellar, Timothy Olyphant, Laurie Metcalf, Joshua Jackson, Jerry O’Connell, and a returning Liev Schreiber (with a much larger role than in the original) join the fun.

Scream 3 is usually considered the weakest in the series, but even that’s not that bad. Sure, it’s a little goofier than the others, but if you like Scream movies, it’s hard to imagine you not having a good time with this one. Parker Posey is both hilarious and a perfect fit for the world Wes Craven builds here.

It’s a conversation to be had, but for my money the best Scream sequel is Scream 4, which came 11 years after the previous movie and finds newcomers Emma Roberts, Rory Culkin, Hayden Panettierre, Alison Brie, and Marley Shelton joining Campbell, Cox, and Arquette. The movie keeps up with the horror of its time—as any Scream movie should—and features just a dynamite, super fun plot.

The new Scream movie—the fifth in the series, though it’s just called Scream—hits theaters 11 years after the last movie in the series, and with a new set of directors. Craven, who directed each of the first four films in the series, died in 2015; the fifth installment is helmed instead by Tyler Gillett and Matt Bettinelli-Olpin, whose last movie was the dark comedy horror Ready or Not. You’ll be delighted to know that the new filmmakers handle themselves wonderfully; it feels like a Scream movie, and like something that Craven certainly would’ve approved of. The new cast for this movie includes In The Heights star Melissa Barrera, The Boys’ Jack Quaid, Yellowjackets and The Leftovers star Jasmin Savoy-Brown, You’s Jenna Ortega, Don’t Breathe’s Dylan Minnette,and Booksmart’s Mason Gooding, all of whom do a great job fitting into this world.

You can see the new Scream in theaters on Friday, January 14th.

END_OF_DOCUMENT_TOKEN_TO_BE_REPLACED 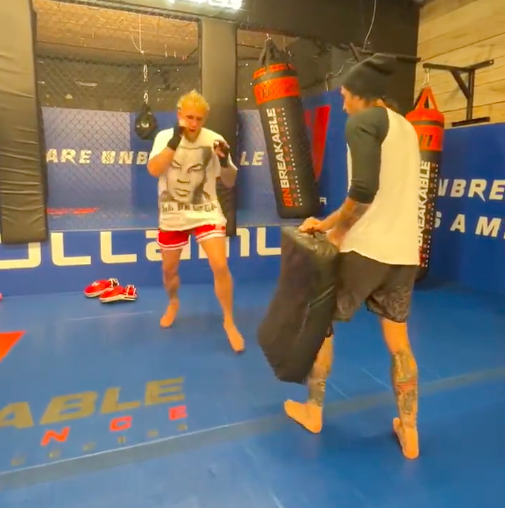 Boxing and martial arts purists might balk at the likes of Jake Paul, but the YouTuber-turned-boxer has just stated that…

Honda Just Invented a Self-Balancing Motorcycle That Never Falls Over

Dropping your bike at a stop sign or during a low-speed maneuver is the fear of any new motorcyclist. It’s…